The Cup’s final game is the single most viewed sporting event on earth.

Yes… it’s bigger than the Olympics:

Some facts:
• 76: number of nations that have appeared at least once
• 2,208: number of goals scored
• 5 – Most wins. Brazil won the World Cup in 1958, 1962, 1970, 1994, and 2002. Italy (four wins), Germany (three), Uruguay, Argentina (twice each), England, France and Spain (once each) are the other past winners in this year’s field.
• Bosnia-Herzegovina: their first major tournament.
• The 2014 World Cup will see matches take place in 12 different cities, more than any other finals on record.
• From north to south, there will be games in Manaus, Fortaleza, Natal, Recife, Salvador, Cuiaba, Brasilia, Belo Horizonte, Rio de Janeiro, Sao Paolo, Curitiba and Porto Alegre.
• 1.1 million tickets (so far) allocated to fans.

8 groups, 4 teams in each. The top 2 advance to second round of 16, and successive rounds to reach the finals.
Followed by Round 2, Quarterfinals, Semi-finals and Finals

Betcha didn’t know: Brazil will use robots to help police the world cup games.
• $7.2 million: amount paid to Massachusetts based iRobot for 30 PackBot robots
• PackBots can travel at 9 mph
• iRobot’s models include a host of sensors including GPS, video, thermal detection, electronic compass and system diagnostics.

201 million: population
Brasilia: the capital
It’s the 5th largest country in the world
Language: Portuguese
Has 25% of the world’s rainforests
Every city in Brazil has a soccer stadium 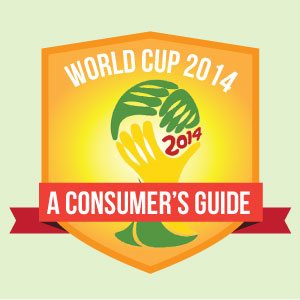