E-sports are blowing up
Largest Prize Pool Ever: $11 million (The International 2014: Dota 2 Championships)[1]

And where the fans go, money follows

First Off, Pick Your Game

Second, become a master at your game

Then Grow Your Audience

Twitch:
Is the home for live streaming on the web.
100 million viewers watch Twitch Every Month
More people watch live streams on Twitch during prime time than those watching cable networks like MTV and CNN

Streamers promote their stream through contests and interactions

Subscribers: viewers who donate to obtain special privileges including:

You’ll Need to Find Some Players

Academies:
Some players get experience on “B-Teams” before they’re ready to make the leap

Other Leagues:
Most e-sports have leagues worldwide. Scout, scout, scout, and hope that players want to move to your country.

Hire a Team to Watch Matches:
You can spectate thousands of top tier games daily.

Discern what else your fans want to see

Average viewer watched 19 times a month
With an average session length of 2.2 hours

If you’re going to win, start crunching the data 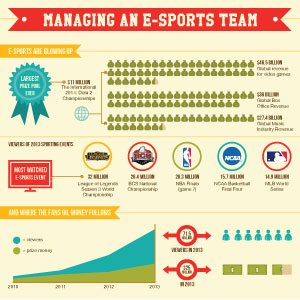