Sports agent covers a wide range of relationships with an athlete. They can be:

A personal friend
A manager
Family member
Accountant
Lawyer
Teacher
Coach
Or anyone who brokers a contract on a player’s behalf.

The Evolution of sports agents:

1985: The North American Society for sport management was formed

The Role of the Agent has evolved:

Legal advisor – Legal advice on player agreements.
Negotiator – Negotiating changes in agreements on behalf of players.
Promoter – Linking teams with players and establishing player awareness on a global scale.
All of the above, and confidante. Besides finding jobs and negotiating contracts, they sometimes also provide other services such as mediation, counselling, career planning, PR coordination, personal assistance, and more.

How to become a certified agent:

Earn a master’s degree in any field you’d like. There is no required major, but the majors that will prove most helpful include sport management, public relations, communications, business and finance.

Though not necessary, you can attend law school. This gives you an edge when trying to build your clientele.

Learn the rules governing the sports league you want to be an agent in, especially the changes in the league’s collective-bargaining agreement.
Take the league’s sports agent exam. With your application, you will need to provide proof that you have earned a master’s degree, and pay a fee to take the exam.

Exams are typically held once per year.

Pass the league’s sports agent exam, and pay another fee to the league before you begin securing clients. It usually takes two to four months to receive examination results.
Maintain your credentials, and pay your league fees to remain an active agent. After becoming a certified agent, you can seek employment with larger sports-management firms or start your own boutique sports agency.

Show me the Money:

Sports agents can charge for their services in a variety of ways including:

Percentage – Agent takes a percentage of a contract, typically 3-5%.
Time – Agent, typically an attorney, charges an hourly rate, typically $400/hour.
Flat-Fee – Agent may agree to perform services for a flat fee.
Combination – Agent charges by a combination of these methods.

5 Agents who changed the world (of sports) in chronological order

FACT: Once named the most powerful man in sports.

David Falk: Once known as the most powerful man in the NBA. Represented: Michael Jordan and professional sports’ first $100 million contract for Alonzo Mourning.
Scott Boras: The “most feared man in baseball” has given general managers nightmares. Represented: Alex Rodriguez’s 10-year, $252 million contract in 2000.
Drew Rosenhaus: A relentless, ruthless salesman, who will stop at nothing to get his players what he thinks they deserve. Currently represents more than 100 NFL clients, including LeSean McCoy, Terrell Owens, DeSean Jackson.

FACT: Rosenhaus was the inspiration behind the Tom Cruise-portrayed lead character (and title) of the movie Jerry McGuire.

Jay-Z, now licensed as an MLB and NBA agent and his company Roc Nation Sports. Notable client: Robinson Cano, NY Yankee, whose contract is now up.

The Top 5 sports agencies: (ranked by amount of current contracts) 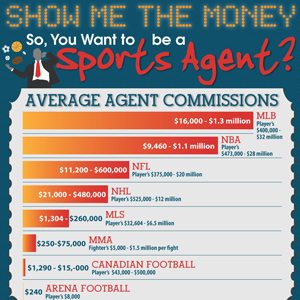