How Olympic Athletes Make a Living

We all know that famous professional athletes can make a great deal of money – sometimes more, even if they’re retired. For example, Michael Jordan, over ten years retired, made $90M in 2013 — possibly more than all of the athletes in the Sochi 2014 Winter Olympics combined — and more than every other active professional athlete individually. Everyone, that is, except for boxer and former Olympian Floyd Mayweather — who earned at least an estimated $80M, possibly more, in just one fight (against Saul “Canelo” Alvarez) alone in 2013. He also fought Robert “The Ghost” Guerrero in 2013, earning at least $32M (guaranteed) for that fight, excluding pay-per-view fees.

However, Olympic athletes are typically nowhere nearly as fortunate. In fact, the IOC (International Olympic Committee) does not pay athletes a cent for their appearance in the Olympics. Athletes have to fund their way either from their own pockets or through other means. Here’s a look at how some of them have done just that, as well as what former Olympians are up to in their careers.

The Goal of Gold

How do Olympians fund their Olympic dreams? One way is out of their own pockets. According to bankrate.com, the 5 richest American Olympians at Sochi 2014, excluding professional athletes such as the NHL hockey players, are as follows:

Looks like quite a trend there (snowboarding, alpine skiing), though keep in mind that Sochi 2014 was for Winter Olympics. Also note, this does not mean these athletes paid their own way to the Olympics.

How Other Olympic-Hopeful Athletes Make a Living

What about all the other Olympians who are not as entrepreneurial as the ones above and do not have endorsement deals? First, a quick bit of history on the lifting of the amateur status for Olympic events.

Since then, athletes sometimes have corporate sponsors — which is different than an endorsement deal.

There is also some money from the USOC and other sources:

Given there are a limited number of medals at any Olympics (Winter or Summer), and many thousands more athletes, not everyone will be fortunate enough to get sponsorships, endorsements, and medal bonuses, and thus not necessarily have the funds to be entrepreneurial. In some countries Olympic hopefuls are sponsored by their government or special programs. In the U.S., things are different.

There are also opportunities in other world sporting competitions that have prize money, though that involves being in the top ten in a given sport. For example, Jack Wickens, USA Track and Field Foundation Board directory, evaluated the income of track and field athletes and found the following:

Those who do not get sponsored or get hired under OJOP or compete in other athletic events typically hold down regular jobs that give them some flexibility to train, including but not limited to being “typical” work having a physical component: coaches, fitness instructors, golf club staff. Though some end up doing odd jobs at seasonal events. For example, snowboarder Tyler Jewell sold sausages at a state fair in New Mexico, amongst other gigs. As he pointed out, it’s difficult to have a full-time job when training sessions run 5 hours (or more) per day.

Here’s a small selection of what some American athletes who have either made the Olympics or are hoping to do so in the near future do for a living.

Still others have part-time jobs and/or live with parents or other family to cut down on costs. Some athletes have university scholarships, but these do not cover the cost of making it to the Olympics. Unfortunately, the cost of being an athlete aspiring to be in the Olympics includes coaches, trainers, medical expenses, equipment, travel — not to mention the typical costs of living.

In the past, athletes have subsisted on food stamps and sharing rent with roommates. E.g., Steve Prefontaine (runner), before the 1972 Olympics — before the rules for Olympic athletes accepting endorsements changed. Others hold fundraisers or auction themselves as celebrity dates or sometimes for sponsorships. Other athletes are more extreme: Tongan luger, Fuahea Semi, changed his name to Bruno Banani, which is also the name of the German underwear and swimsuit company that sponsors him.

The Lucky Ones: How Former Olympic Athletes Make a Living

Here is a non-comprehensive list of former Olympians and how they’ve made a living or otherwise attracted attention to their post-Olympic careers.

Those who are entrepreneurially-savvy also start businesses, invest in real estate and bars, restaurants chains and more. 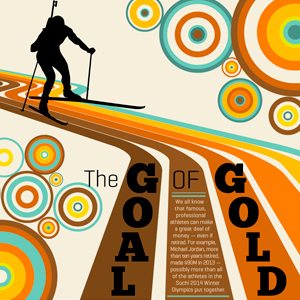 Information for this article was collected from the following pages and web sites: