Nothin’ But Net … Worth

7 NBA Stars Who Get Business Done Off the Court!

It is no surprise that NBA players make a ton of money. What may surprise you is that a staggering 60% of NBA players go broke after they stop playing professional basketball.

[Side Note: Here is a chart of the minimum salaries for NBA Players according to the Collective Bargaining Agreement of 2011. Even if a person plays for 4.8 years at the league minimum he will make around $4 million.]

Here is a list of 7 business savvy NBA players who were able to turn their earnings into more cash. They are ranked by what we call the “Turn-a-Buck Ratio.”

Ulysses “Junior” Bridgeman is the wealthiest former basketball player that you’ve never heard of. The man made far less playing basketball than the majority of the players on this list. Yet, his net worth is the 3rd highest. He buys restaurants so quickly it’s hard to keep up. These numbers are current to January 2014.

Magic Johnson made it to our number two spot because of his wise investments. Today, most of Johnson’s net worth is tied up in Magic Johnson Enterprises (MJE). MJE houses multiple businesses in a variety of industries such as real estate, restaurants, and media. MJE is valued at $1 billion giving Johnson a net worth of $500 million.

Technically, the majority of Michael Jordan’s wealth did not come from investing money. However, his negotiations with Nike that gave him royalties of the Jordan Brand was a great move. He makes over $60 million a year from that deal alone. With the highest net worth of any professional basketball player in history, Jordan deserves to be on this list.

David Bing founded his own steel company called Bing Steel in 1980. By 2009 the company reported $400 million in sales. Bing’s company was hit hard by the recession and sold around 2010 otherwise he would probably be higher on this list. Bing was elected Mayor of Detroit in 2009 and has since been re-elected to a second term.

James is the only active player on our list. What makes him so brilliant is the way he approaches deals. He is a brilliant negotiator. Not only does he get creative control over ad campaigns in which he appears but he also attempts to get stake in the companies with whom he does business. His net worth could grow over a billion dollars eventually.

Hakeem “The Dream” is best known for his signature move on the court, the Dream Shake. While the Dream Shake made him one of the best Centers of all time, his knack for playing the real estate market has made his net worth sky rocket. One of his most noteworthy investments was when he made $13 million in profit selling swampland to Houston’s transportation agency.

Shaquille O’Neal’s LinkedIn profile says it all, “CEO, President: A Lot of Companies, Inc.” While his career salary was extremely high, his investments could help him become the first former NBA billionaire. If that weren’t enough, in May 2014, Shaq wrapped up a crowd funding campaign to fund the creation of a new video game sequel called “Shaq-Fu: A Legend is Reborn.” 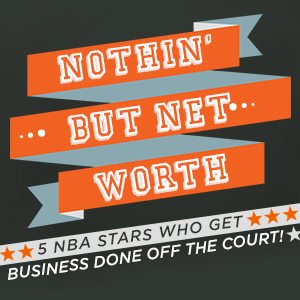