Things aren’t looking great for Sochi, the Russian host city of this year’s Winter Olympics. Russia’s anti-gay laws have been attacked from various corners, and the bill for the games is said to be the highest in history.

These games have proved to be the most expensive in history, surpassing 2008’s summer games in Beijing.

It’s Not About Sports

Back in 2007, when Sochi was chosen, Vladimir Putin said the games would cost his country only $12 billion; how did that turn into $50 billion? According to many observers, corruption is to blame.

$30 billion
Amount of embezzlement determined in one study, about 60% of the stated final cost thanks to a system rife with kickbacks
In June 2012, charges were filed against contractors at two venues alleging builders inflated costs.

Bang for the Buck?

The money being spent in Sochi not only is much more than what was spent in Beijing, but it’s also being spent on fewer events. In other words, the Chinese did more with less. Summer games have about three times the events of winter games.
Spending per event
Beijing 2008 $132 million
Sochi 2014 $520 million

Down the Toilet?
Corruption or not, it’s hard to deny preparations for the Sochi games haven’t gone well.
The men’s restroom at the biathlon building was missing a key element — a wall between the toilets in a stall. 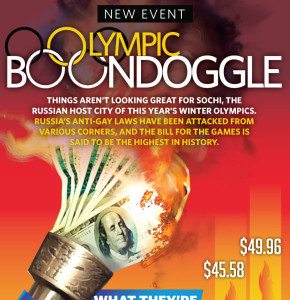