Inside the NFL’s Tax-Exempt Status

As a multibillion-dollar business, many Americans have been shocked to learn the NFL enjoys tax-exempt status — sort of. What is the league’s tax status, how much is it worth and what would be the implications of the league giving up (or being stripped of) its tax exemption?

The National Football League, like several other professional sports organizations, enjoys some tax benefits, one of them being that the NFL League Office is classified as a nonprofit organization.

What else is covered by the IRS code?

But the NFL’s tax exemption dates back even further than that. A struggling sports league in 1942, the NFL League Office received tax-exempt nonprofit status from the IRS. That continued until 1966, when as the AFL was making a hard challenge to the NFL for TV contracts, college stars and popularity among regular fans, the two leagues agreed to a merger. In order to avoid running afoul of antitrust laws, the merger had to be approved by Congress. And that meant convincing Louisiana Sen. Russell Long, the chairman of the Senate Finance Committee.

So how did the deal get done? Then-NFL commissioner Pete Rozelle agreed to allow a new franchise team. The location? New Orleans, in Long’s home state of Louisiana.

Not the Whole NFL

Only a small portion of the NFL, the league office, is actually tax-exempt. The teams are still subject to taxes, as are most of the NFL’s operations, through NFL Ventures and NFL Properties.

Functions of the league office

What About Other Leagues?

The NFL isn’t the only pro sports league that takes advantage of the IRS rules; it’s just the most lucrative.

Major League Baseball formerly had tax-exempt status but voluntarily gave up the designation back in 2007.

The NFL is simply taking advantage of the IRS code pertaining to its operations. It would be difficult to make a case that the league is breaking the law. But that doesn’t mean everyone agrees that the league’s tax-exempt status is truly on the level.

The office acts as a trade organization for the NFL’s member teams and doesn’t engage in business activity. The league office does not receive any income from game tickets or TV contracts, so its tax exemption doesn’t apply to any of the $11 billion profits the league is expected to earn this year.

The NFL League Office is not a trade organization because it does not advocate on behalf of professional football in general, but rather the NFL itself. The NFL isn’t an open league; after all, you can’t just start a team and join the NFL.

Amount the NFL spent to lobby Congress in 2013

Amount the league spent in 2003

Not only does the NFL have a tax advantage thanks to the IRS, it’s also been the beneficiary of publicly funded stadiums in dozens of cities. Here’s a look at some recent, expensive projects, including the under-construction Vikings’ stadium:

So what would change if the league office were stripped of its tax exemption?

Several efforts have been made over the years to repeal the NFL’s tax exemption. With recent high-profile domestic violence cases against NFL players and the ongoing controversy over the Washington team’s nickname, those movements seem to be picking up steam.

Several senators have introduced bills in recent months to repeal the league’s protection:

In addition, a Change.org petition to revoke the league’s tax exemption has more than 400,000 signatures. 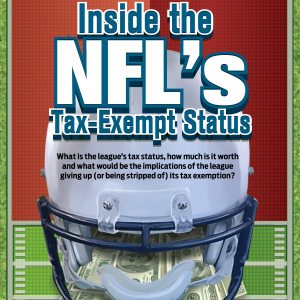