The Golden Glove: Can You Buy Championships? 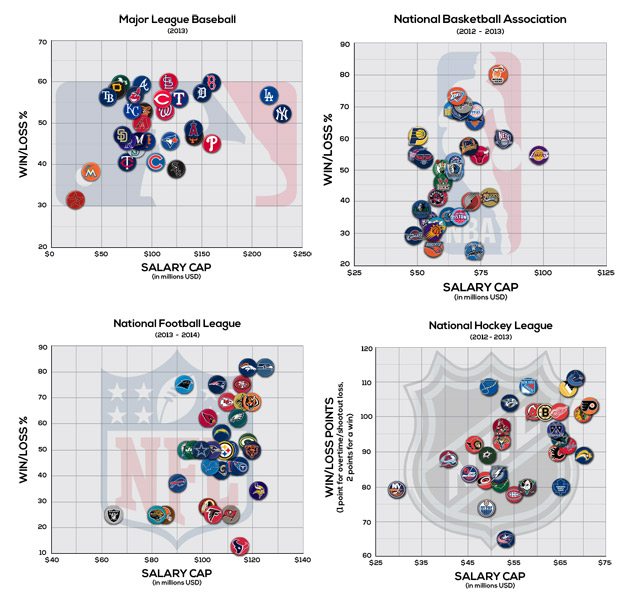 Don Drysdale, the 9x all star and hall of fame pitcher for the Dodgers in the 60’s observed, “When we played, World Series checks meant something. Now all they do is screw up your taxes.” The quote’s from 1978, but the point should be even more evident now. When the NFL commissioner brings in $30 million a year, you better bet sports is big business.

But the quote hints at another point as well. When your contract is worth $150 million over 5 years, is it really that pressing to prove yourself day in and day out? What about the blood, sweat and tears of the underpaid rookie out to prove himself?

[Tweet “When your contract is worth $150 million over 5 years, is it really that pressing to prove yourself?”] 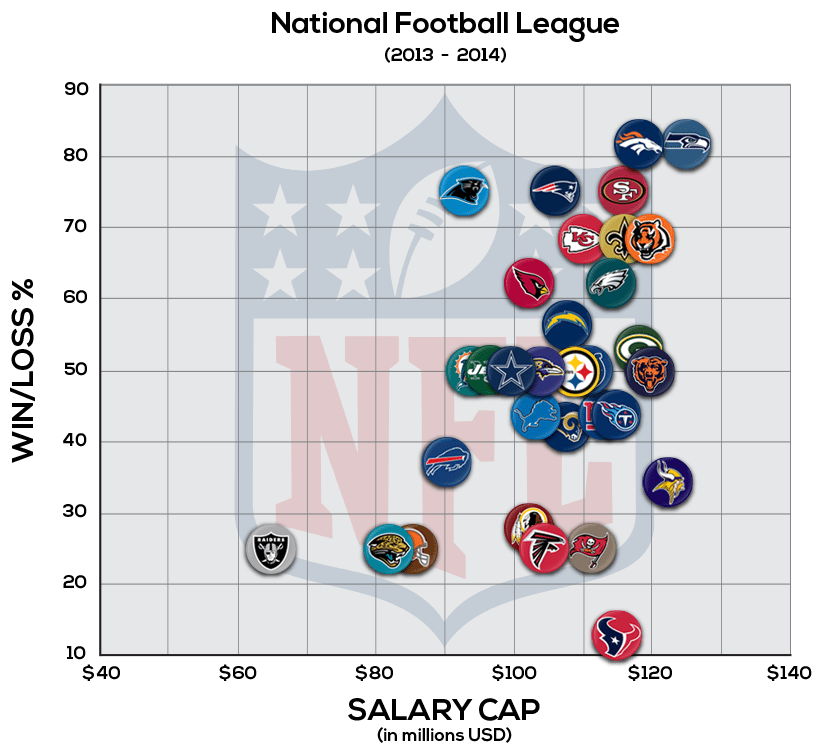 More than in any other league we survey, money seems to matter A LOT in the NFL. Both Superbowl competitors were in the top 5 spenders, with only a $6 million difference in their salary caps. By comparison, the difference between the highest and lowest salary cap teams was a whopping $60 million. The Superbowl champion Seahawks were the highest spender in the league, and 7 of the top ten spending teams made it to the playoffs. The largest outlier came in the form of the Panthers who had the third best win/loss ratio in the league, and made it to the playoffs with the 5th lowest salary cap. 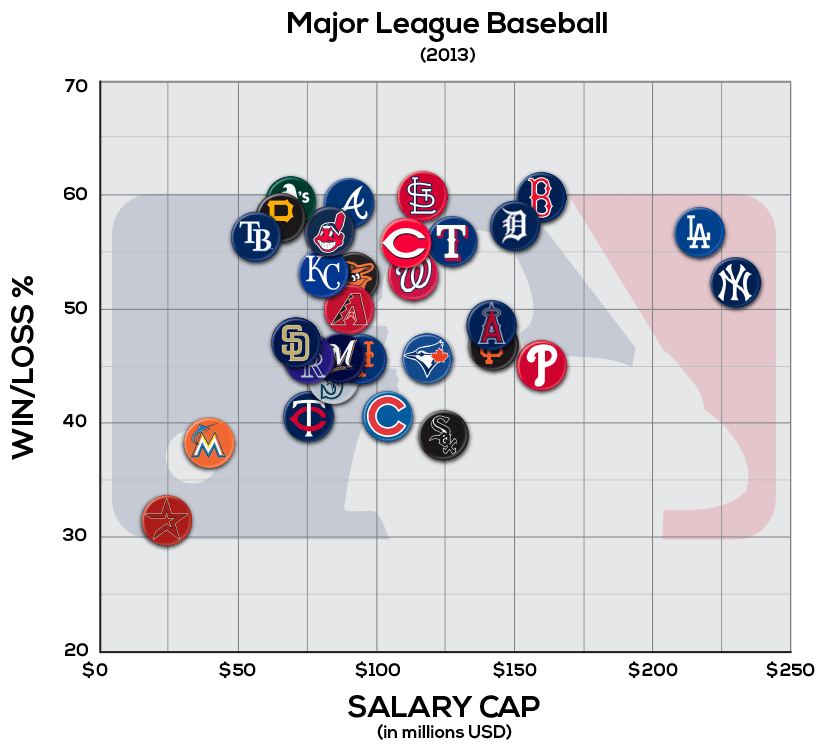 [Tweet “Something can definitely be said for the fact that America’s pastime is a game for underdogs.”]

Something can definitely be said for the fact that America’s pastime is a game for underdogs. Even with a whopping $200 million difference in salary caps, playoff teams were spread evenly across the spending spectrum. Three teams from the top five spenders, and the bottom five spenders made it to the playoffs, though both teams in the World Series were in the top 11 salary caps. Tampa Bay was the lowest payroll to make it to the playoffs, and made it work with $10 million less than the next highest spender. Yankees haters can cheer with glee with the top spenders not even making the playoffs. Maybe that’s what happens when your highest paid player makes more than the entire Astros roster and is injured for much of the season. 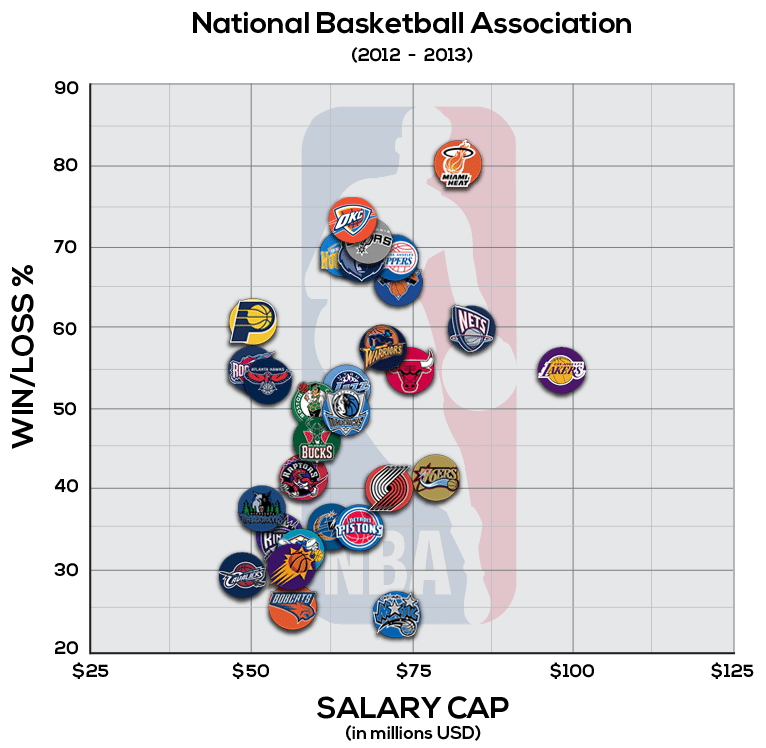 The NBA lines up about how you would expect. In a league where Kevin Durant or Lebron can dominate a game, it pays to have an all-star lineup. The flip side is that even lower salary cap teams can have a all star or two, as seen by three of the bottom five spending teams making the playoffs. There’s also something to be said for quality organizations. The Spurs may not be as flashy as the Heat, and are about halfway down the spending table, but they made it to the finals too, and only lost in the 7th game. Plus they’ve won 4 championships since 1999 (maybe you don’t have to spend as much when you’re a dynasty). 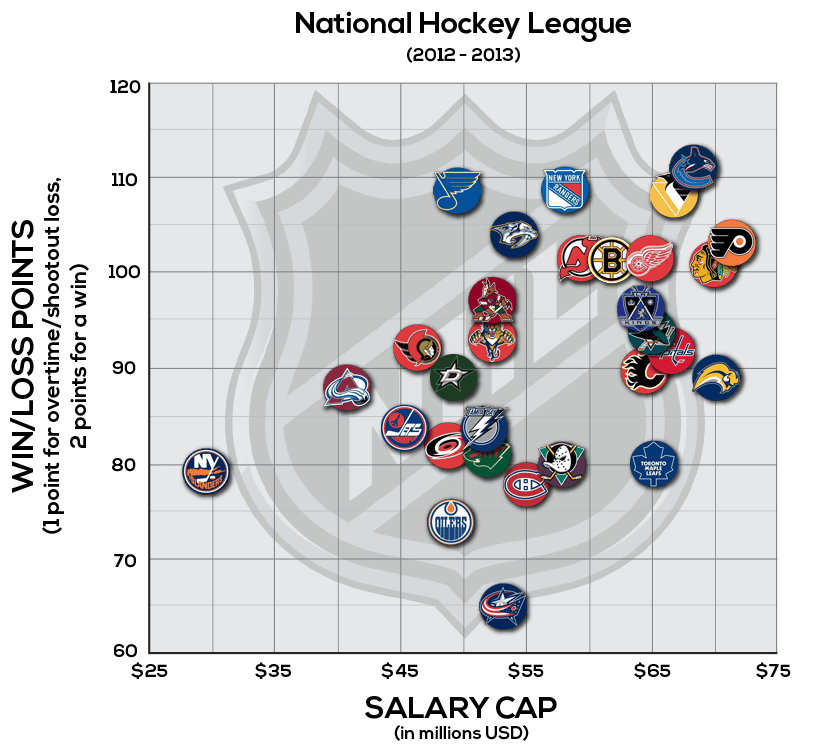 There seems to be a happy medium for spending in NHL, with more than a third of playoff teams, and both Stanley Cup teams ranking from 9-14 in pay. However, with the lockout that cancelled most of the following season, perhaps there were underlying issues for the 2011-2012 pay structure. Though the bottom half of the pay scale did not have a good record of making it to the playoffs, compared to the other leagues surveyed, the payroll disparity is not nearly as large in the NHL as in other leagues.