All those late nights grinding up the ladder may finally be paying off. As e-sports have emerged as sustainable big business (and increasingly competitive sporting), colleges have begun to jump int the fray. From e-sports programs created by small groups of passionate gamers, to schools providing gaming support to attract talented students, more than 50 institutions of higher education in America have created e-sports programs at the varsity level. Into games, but never imagined yourself getting a scholarship for a sport? We’ve got you covered with the ins-and-outs of how scholarships for e-sports work below.

1.) Overview of College Scholarships for Athletics

Traditionally, varsity athletics at the collegiate level has been governed by the athletic association of which the university is a member. Common athletic associates such as the NCAA, NAIA, and the NJCAA govern who is eligible for competition, funding of athletic teams, standardized keeping of rules and results, training of referees, and more.

Many collegiate e-sports teams are also club teams, meaning that they are not a varsity sport, but rather a club that meets. Traditionally clubs gain some funding from the university (depending on the school), though often rely on fundraising or individuals for other expenses. Further more, club teams are unaffiliated with athletic conferences. This doesn’t mean that clubs don’t join into competition with athletic programs that are varsity, but rather that they must arrange this on their own and outside of traditional collegiate athletic conferences. While most club-level sports at universities do not offer scholarships, many universities have responded to the glut of interest in e-sports by offering scholarships to support their e-sports clubs.

In recent years, the National Association of College e-Sports has emerged as a governing body specific to e-sports. Currently some 57 schools are registered with varsity teams that compete in a range of e-sport games. Check out their directory to find some of the most prominant collegiate e-sports programs.

2.) What e-Sports do Colleges Support? 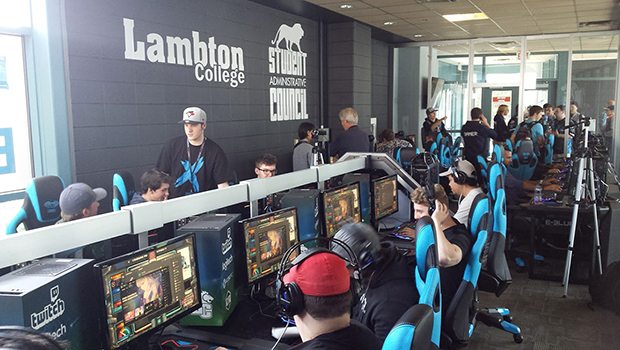 E-sports on college campuses have occured for some time, even occasionally with endorsement from university administrations (help with event planning, funding, competitions). E-sports have really only taken off on college campuses, however, with the rise of e-sports generally, particularly games such as League of Legends, Hearthstone, Overwatch, Counterstrike, Heroes of the Storm, and Starcraft. Currently League of Legends is by far the most popular collegiate e-sport, followed by Hearthstone and Counter-Strike.

As far as how universities support e-sports, that varies to some extent from university to university. With the rush to attract talent and be one of the first schools jumping into e-sports, however, schools are providing more support, services, and publicity for their programs by the year. With just a handful of schools with programs 2 years ago, 2017 found over 50 programs nationwide. This number is expected to double within the next year. Some leading universities in the e-sports scene have erected practice spaces with high-end gaming pc’s and auditoriums for students to come watch live games. Additionally, many e-sports programs pay for coaching staff, pay for travel and lodging to attend competitions, and provide scholarships.

Just like more traditional athletics, choosing a college should come down to more than just athletic aspirations. How good is the school? Do they have an academic program you would like to pursue? What is the cost? Will you do better at a big or a small school? Questions like these should play an equally large part in your college selection process. With that said, there are now colleges and universities of many types that support e-sports organizations, many of which offer scholarships for e-sports. Below we’ve listed all universities with e-sports programs, what games their organization supports, and whether they provide scholarships.

Tip: if you’re into e-sports but aren’t a good enough player to make the roster, many schools are integrating e-sports into their course work and employment opportunities. By helping with an e-sports program you can gain valuable experience in streaming technologies, marketing, sports management, event planning and more. Interested in how to become an e-sports manager? Check out our guide on the topic here. Check out e-sport pages at universities to see if they are actively recruiting casters, creatives, and strategists for their e-sports.

While this list is growing by the month, 57 universities offer varsity e-sports as of March, 2018.